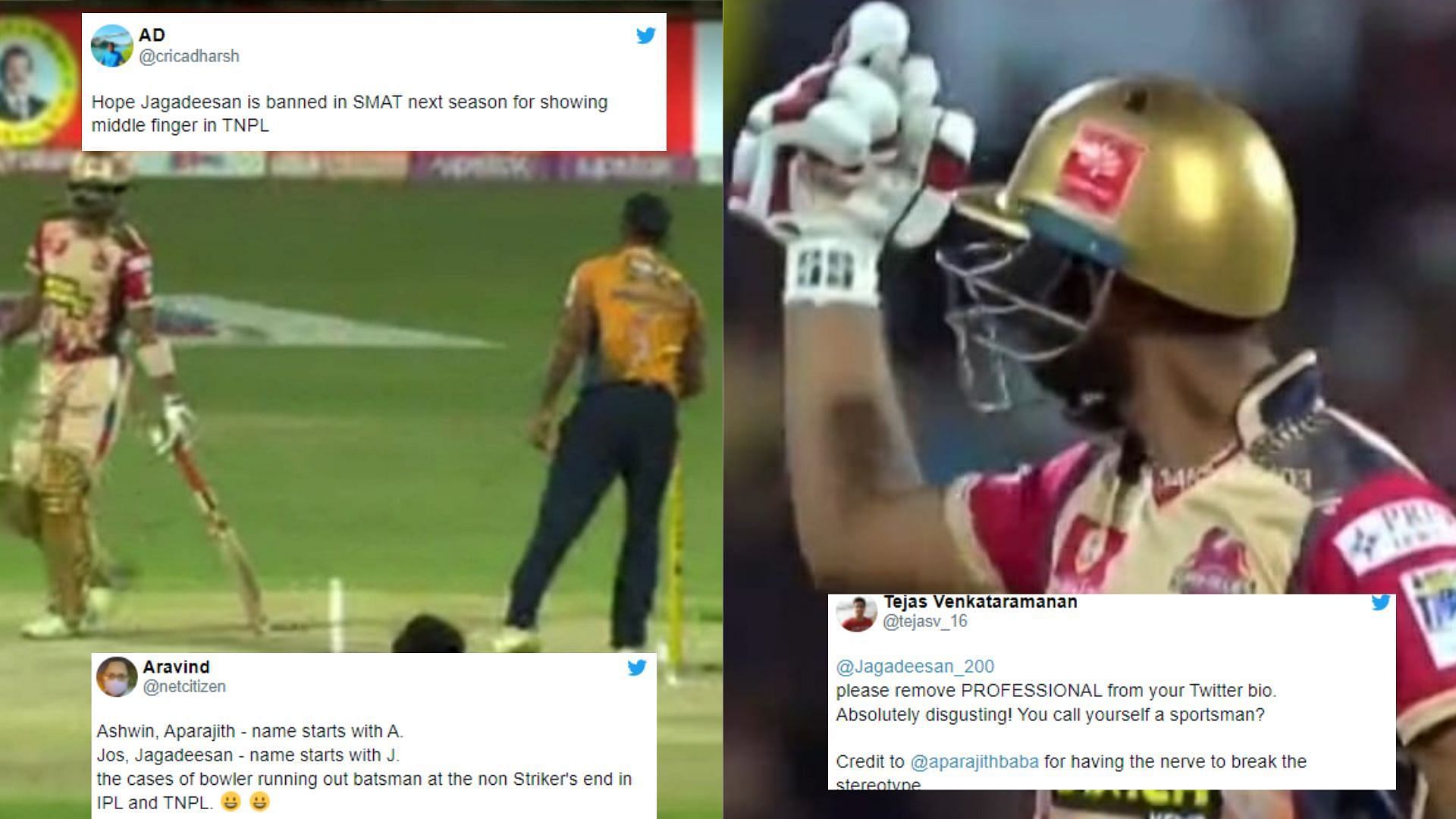 The Tamil Nadu Premier League (TNPL) 2022 got off to a fiery start with the clash between Chepauk Super Gillies and Nellai Royal Kings on Thursday, June 23. Two Tamil Nadu stars, Baba Aparajith and N Jagadeesan, engaged in a heated exchange. Aparajith ran out Jagadeesan at the non-striker’s end as the latter backed up too much.

Even though the bowler was well within his rights to whip the bails off, Jagadeesan wasn’t a happy man. He showed his middle finger multiple times before walking back furious into the dugout.

Fans on Twitter slammed N Jagadeesan for showing his frustration despite being run out fair and square. They felt Aparajith was well within his rights to run him out. The off-spinner had pulled out of his run-up once to give Jagadeesan an indirect warning.

Here are some of the reactions:

Baba Aparajith runs out Jagadeesan at non striker’s end on his delivery stride. Out as per the laws. Jagadeesan was not too pleased at all

Baba Aparajith runs out Jagadeesan at non striker’s end on his delivery stride. Out as per the laws. Jagadeesan was not too pleased at all

Let’s get this right. Baba Aparajith runs out N Jagadeesan as per laws of the game in the #TNPL2022 opening match #TNPL

Let’s get this right. Baba Aparajith runs out N Jagadeesan as per laws of the game in the #TNPL2022 opening match #TNPL

N Jagadeesan is run out at the non-striker’s end for leaving the crease early. High time this mode of dismissal is normalised. #TNPL2022

N Jagadeesan is run out at the non-striker’s end for leaving the crease early. High time this mode of dismissal is normalised. #TNPL2022

hahaha. @aparajithbaba ran out Jagadeesan in the bowler’s end walking out of the crease as he was on his bowling stride.. jaggy walks off showing middle finger.. looked silly on TV…

hahaha. @aparajithbaba ran out Jagadeesan in the bowler’s end walking out of the crease as he was on his bowling stride.. jaggy walks off showing middle finger.. looked silly on TV… 😀 😀

@CricCrazyJohns And he shows middle finger to aparajith after that dismissal 🤐

@CricCrazyJohns And he shows middle finger to aparajith after that dismissal 🤐

TNPL delivers a Super Over in the first game itself

The TNPL 2022 opener between the Nallai Royal Kings (NRK) and the Chepauk Super Gillies (CSG) produced a thrilling finish. The game went right down to a Super Over.

Batting first, NRK were in deep trouble at 27/3 at one stage. However, L Suryaprakash and Sanjay Yadav got together and steadied the ship. While Suryaprakash played second-fiddle, Yadav played an incredible knock of 87* off just 47 balls. His stunning innings took his team to 184/4 in their 20 overs.

In reply, CSG skipper Kaushik Gandhi held the fort from one end. However, wickets tumbled from the other end and the game got really interesting towards the end. Harish Kumar played a fantastic cameo to take the game to the Super Over.

N Jagadeesan got another chance to bat and pumped a six straight down the ground. However, his team scored just nine runs and that wasn’t really going to challenge NRK as they registered their first points of the season. 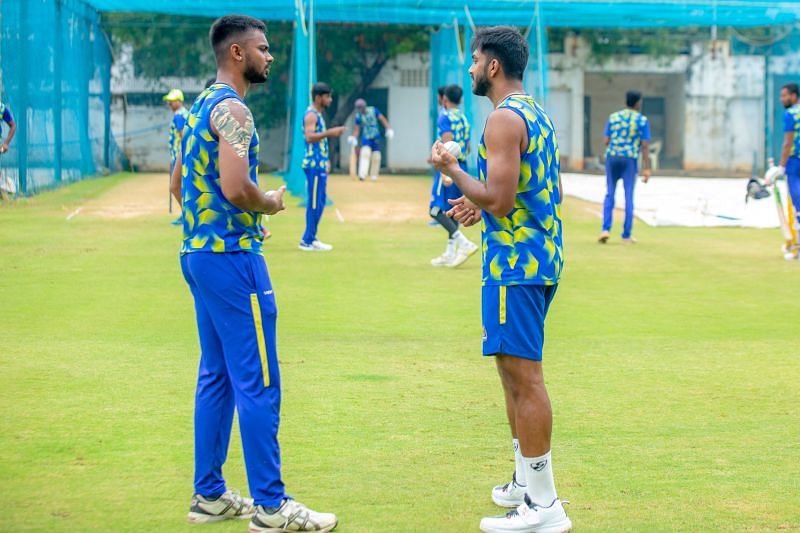 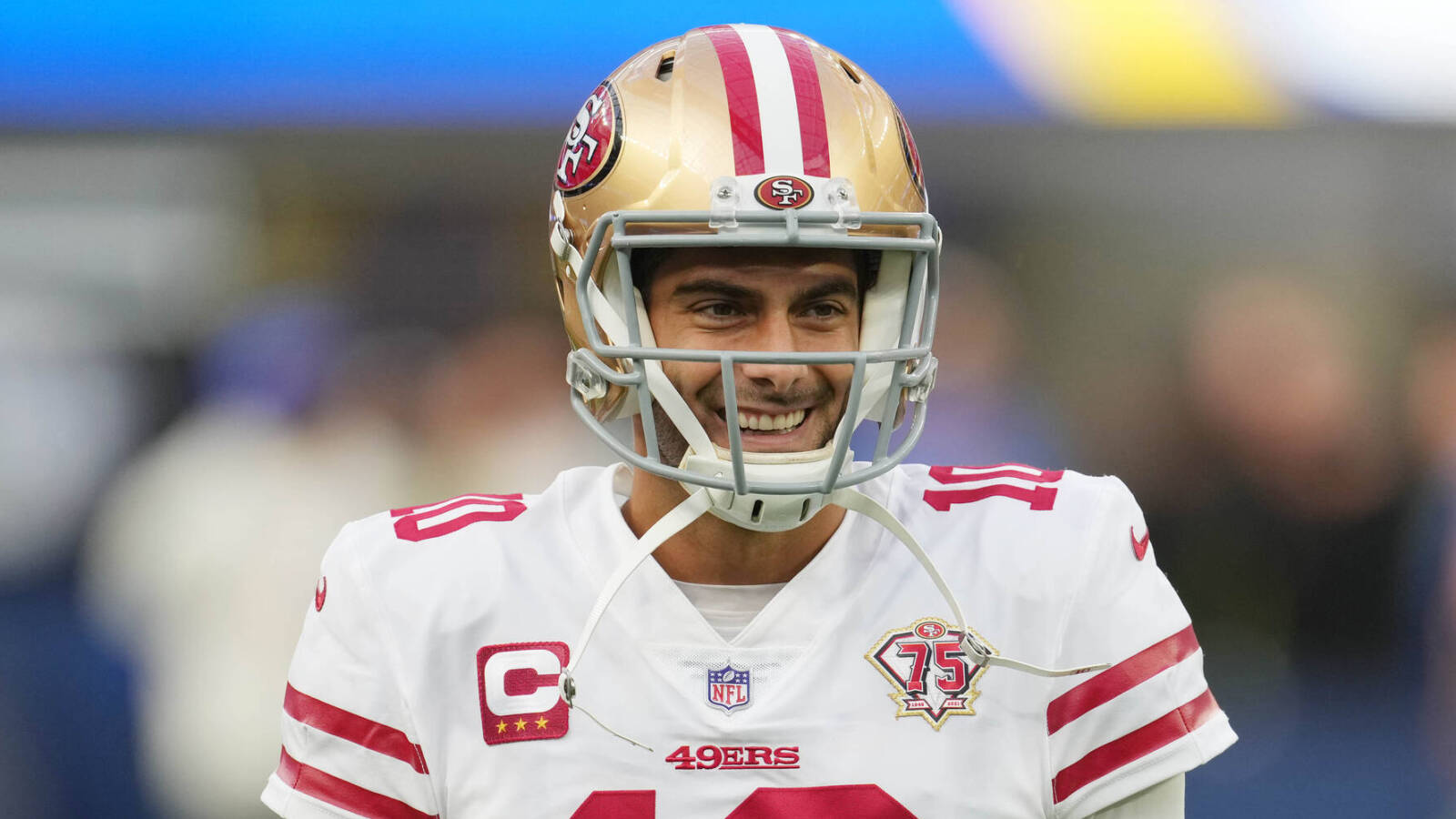 Jimmy Garoppolo’s recovery from shoulder surgery is going well, and the San Francisco 49ers quarterback will throw over the next few weeks, according to ESPN’s Jeremy Fowler.

Fowler also says that Garoppolo might be able to pass a physical relatively soon, which would cause the trade market for the quarterback to kick back into gear.

Garoppolo, 30, started 45 games over the last five seasons with the 49ers, but the team is set to move on with 2021 third overall pick Trey Lance inheriting the starting role. Last season, Garoppolo threw 20 touchdown passes with 12 interceptions in the regular season and helped lead the team to the NFC Championship Game.

San Francisco general manager John Lynch said that the team was “close in some discussions” to trade Garoppolo earlier in the offseason, but those talks came to a “screeching halt” when the quarterback opted for surgery in March.

Since then, several teams have addressed their quarterback vacancies. One of those teams is the Indianapolis Colts, who were reportedly in talks to acquire Garoppolo before landing Matt Ryan in a deal with the Atlanta Falcons. Also on the trade market is Cleveland Browns quarterback Baker Mayfield, who has been linked to the Seattle Seahawks and Carolina Panthers in rumors.