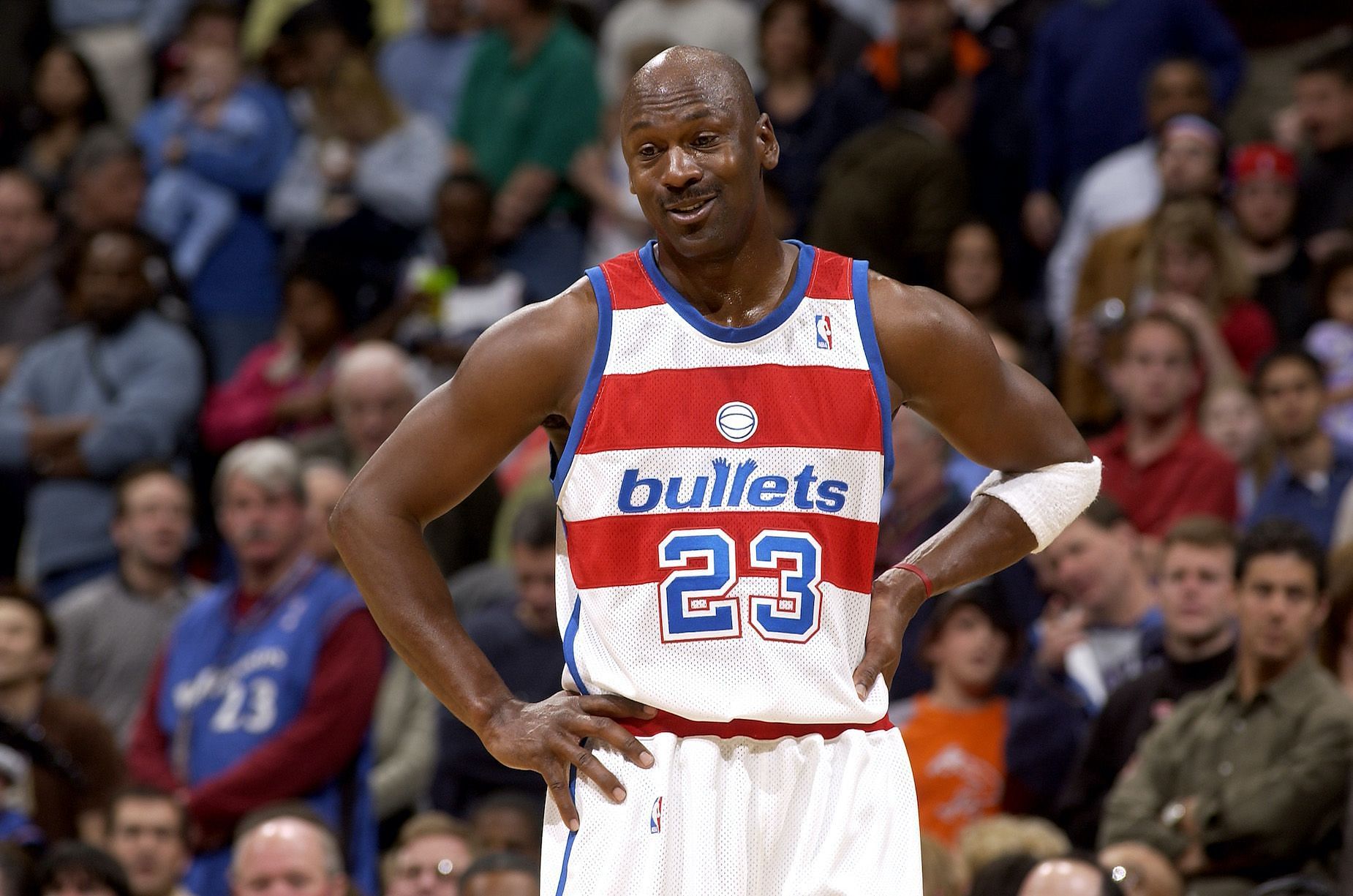 Michael Jordan is one of those people who never fails to make an impression on others. Over the years, current and former players have recounted, sometimes very vividly, how and when they met Jordan.

Andre Miller, on an episode of “The Knuckleheads,” recalled in detail the first time he came face-to-face with the six-time champ:

“When Michael Jordan was gonna come back, we all at UCLA … We go out to Santa Barbara, and Jordan come in and looked like he had been swimming. He was sweating, and I was like, ‘Hold up, that’s Michael Jordan.’ And the first thing that came out of his mouth was, ‘Give me Dre Miller and whoever else.’”

Miller scrimmaged with Jordan more than two decades ago, but he can still recall the minute details of the encounter. This was the time when “His Airness” was looking to return to the NBA for the second time after leading the Chicago Bulls to their sixth title in eight years.

20 years ago today, Michael Jordan retired for the second time after his sixth title.

20 years ago today, Michael Jordan retired for the second time after his sixth title.He said there was a “99.9 percent” chance he’d never come back.

The former NBA journeyman talked about how he has looked up to the iconic superstar over the years:

Miller was in his third season when he eventually got the chance to play against Jordan as a pro. MJ felt like he had some unfinished business to complete after his Bulls unceremoniously disbanded after the 1998 title.

When Chicago broke up the dynasty, Scottie Pippen, Dennis Rodman and Toni Kukoc were aging but still dominant forces. They could have had the chance to defend their title, particularly due to a lockout-shortened season in 1999.

The breakup of the 1997-98 Chicago Bulls was like nothing we had ever seen in NBA history.

The breakup of the 1997-98 Chicago Bulls was like nothing we had ever seen in NBA history.

In the five games Miller played against Jordan, the Hall of Fame lost only once. On practically one leg, “His Airness” still averaged 23.4 points, 6.4 rebounds, 5.4 assists and 1.2 steals. “The Professor” split his time between the Cleveland Cavaliers and LA Clippers during this time.

Andre Miller recalled a time when Michael Jordan first played in Cleveland after Jordan returned to the NBA. MJ was treated like royalty and a rock star even on the Cavs’ home floor. Jordan also played with the same aggressiveness and fiery nature that made him so unique.

In his first season with the Washington Wizards, Jordan played 60 games and averaged 22.9 points, 5.7 rebounds, 5.2 assists and 1.4 steals. At 38 years old, he was still doing it on both ends of the floor. The Wizards looked like they were making the playoffs until Jordan’s injury ended their hopes.

In his farewell season, MJ reportedly wouldn’t even miss practice as it is a sign of weakness. He finished that year playing all 82 games and showed fans and players what the GOAT is all about.

Adam Azim promises to show opponent Anthony Loffet respect, but drop him as soon as he gets the chance

Salem Spartans squared off against the Nellai Royal Kings in the fourth match of the Tamil Nadu Premier League 2022 at the Indian Cement Company Ground in Tirunelveli on Saturday (June 25). It was a comprehensive victory from the Royal Kings as they made it two in two.

Nellai Royal Kings skipper Baba Indrajith won the toss and opted to bowl first. The Spartans got off to a fantastic start as they scored 54 runs in the powerplay, losing two wickets. R Kavin and Daryl Ferrario joined hands and put up a solid partnership for the third wicket. The duo were cruising but the fall of Kavin’s wicket in the 15th over led to a collapse.

Kavin departed on 48 and the Spartans lost their way as they slipped from 121/2 to 149/7 at the end of their 20 overs. Ferrario remained unbeaten on 60 off 49 balls and helped his side get close to 150. Athisayaraj Davidson and NS Harish picked up two wickets each for the Royal Kings.

Royal Kings’ batters step up to make it two in two

In response, the Royal Kings kept building solid partnerships. Contributions from Laxmesha Suryaprakash (35), Baba Aparajith (32) and a brilliant cameo from G Ajitesh (48* off 25 balls) helped them chase down the total in the 18th over. G Kishoor picked up two wickets for the Spartans but they failed to fire as a unit and were unsuccessful in defending the total.

The Nellai Royal Kings have played two games and won both. After beating the defending champions in their opening game, they carried forward their winning momentum as they beat the Salem Spartans in their following game.

The Spartans were outplayed in their opening game and need to be on their toes in their next game to bounce back in the competition. The Royal Kings go to the top of the table with this win. Karriss Artingstall, a bronze medallist at the Tokyo Olympic Games, made a seamless transition to the professional sport as she hammered out a six-round points win over Vaida Masiokaite.

At the Skydome Arena in Coventry, Artingstall took command of her bout with Masiokaite from the start, marching in close, drawing punches from her opponent to hammer in her own power shots.

She began to shake Masiokaite with right hooks that clipped the chin and upped her intensity in the fourth round, driving in combinations.

Fighting from the southpaw stance the Olympic featherweight bronze medallist lined up a heavy left cross, blasting it through the Lithuanian’s guard. Masiokaite was feeling the pressure and Artingstall hit with crisp, solid power.

Karriss Artingstall admits she had nerves ahead of her pro-debut, but enjoyed her win over Vaida Masiokaite.

There were hints that Masiokaite could be about to unravel but she is resilient, she’s only been stopped inside the distance once and that was against Chantelle Cameron, now a unified world champion all the way up at super-lightweight.

“I enjoyed it,” Aringstall said afterwards.

“[I was] more nervous for the ring walk to be honest, but once that first bell goes it’s what I live for day in day out, so I’m used to it.”

Tyler Denny won a tremendous battle for the English middleweight title against local Coventry man River Wilson-Bent. Denny, a southpaw, piled forward, getting himself onto the front foot and working up close.

He shook Wilson-Bent with lead right hooks and dictated where the bout was fought, forcing his opponent to the ropes and attacking the body.

A point off for clinching put Wilson-Bent in an even worse position. But he showed tremendous heart, roaring back in the final round to tag Denny with hurtful shots in the corner.

The decision was split, with judge Steve Gray scoring 96-94 for Wilson-Bent. But Terry O’Connor and Kevin Parker both had it for Denny, 97-93 and 96-93 respectively.