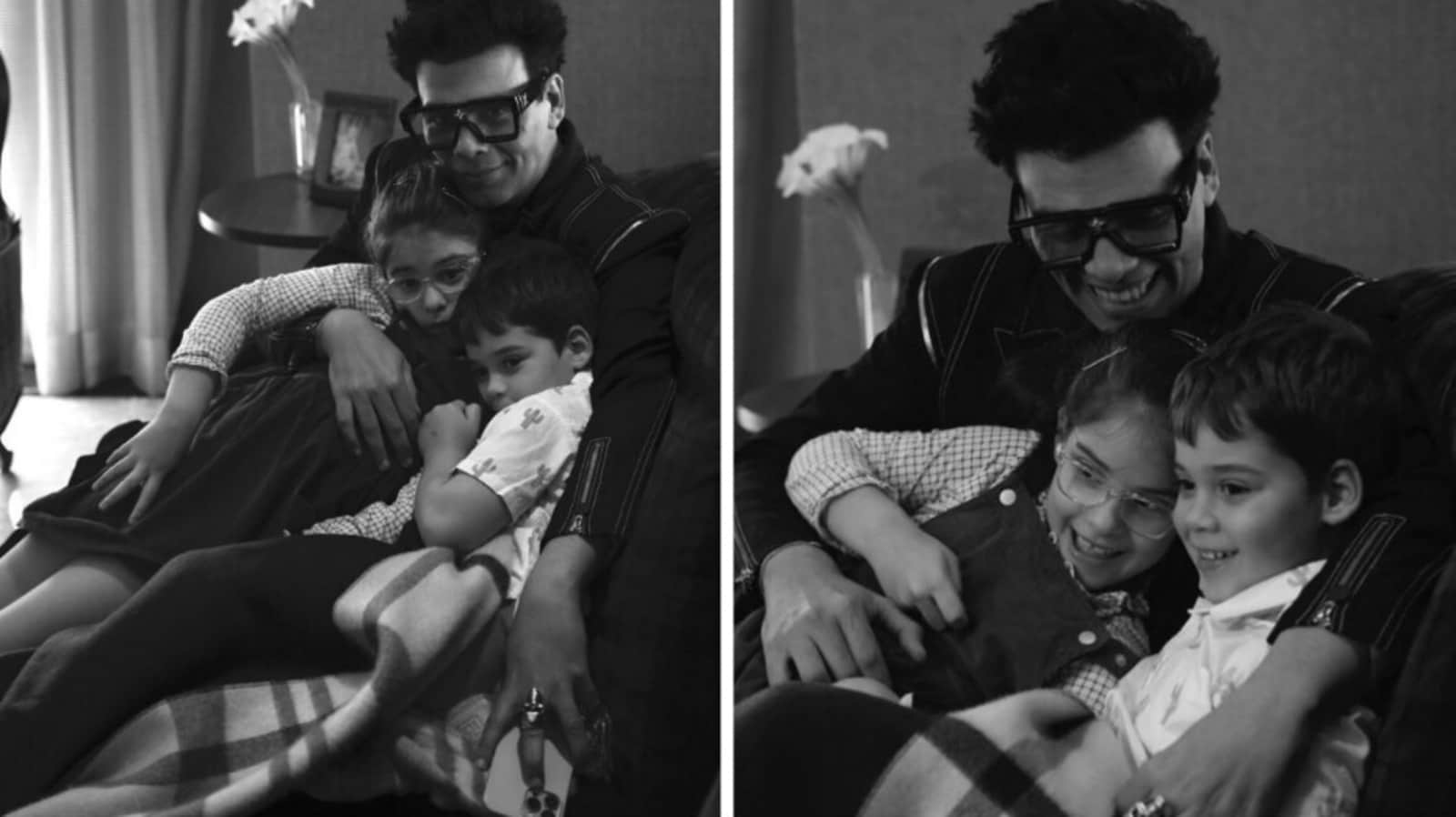 Filmmaker Karan Johar took to Instagram handle and shared series of photos from his latest indoor photoshoot on Wednesday. He posed with his children Yash Johar and Roohi Johar. He flashed his million dollar smile as he got clicked with little kids. He also penned a heartfelt note on parenthood. He said ‘being a parents is not an emotion.’ Along with fans, Kiara Advani, Neetu Kapoor and Riddhima Kapoor reacted to Karan’s loved-up post with children. (Also read: Karan Johar’s twins Yash-Roohi wear matching outfits like him, proud dad reacts ‘I will take it as a compliment’. Watch)

In the black and white pictures, Karan wore a shirt with his spectacles. His daughter Roohi wore a frock while son Yash sported a shirt with pair of shorts. Karan can be seen cuddling his children as he held them while posing for the camera. The three sat on a sofa and struck a candid pose while flashing big smiles. Karan also shared a picture featuring Yash and Roohi. Yash laughed as he looked straight into the camera, while his sister looked down.

Sharing the monochrome photos of himself with children, Karan wrote, “Being a parent is not an emotion … it’s an explosion of every emotion you may have experienced …. Words are not the best way to describe the feeling of being a parent… if only cuddles had a language of their own..thank you for shooting these precious images @ishaannair7.” Anil Kapoor, Neetu Kapoor, Kiara Advani, Riddhima Kapoor Sahni and Maheep Kapoor dropped heart emojis. Abhishek Bajaj wrote, “Most precious!” Film director Tushar Tyagi commented, “Such a wholesome picture.”

Reacting to the pictures, one of Karan’s fans wrote, “Children are your hearts outside your body (red heart emoji). God bless.” Another fan commented, “Heart warming (red heart emoji).” Other fan wrote, “Nothing beats the colourful emotions in a black and white picture.” A fan also commented, “Much love to the twins.” “Cutest kids and best dad”, wrote one. Many fans dropped heart emojis on the post.

Karan keeps sharing videos and pictures of his kids on social media handle from their daily lives. In some of them, Yash and Roohi are seen questioning Karan’s fashion sense as well. He embraced fatherhood in 2017. 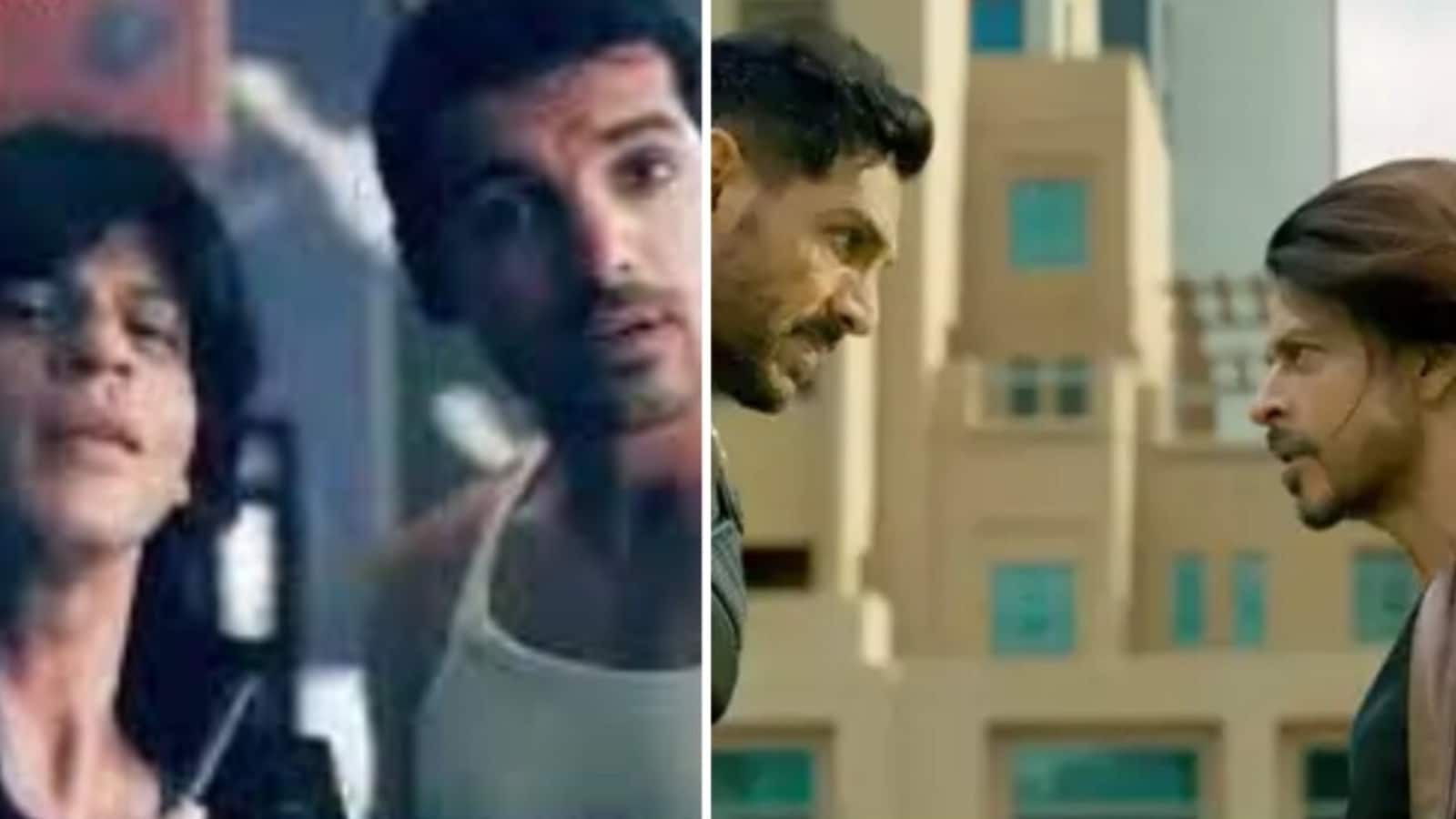 Before co-starring in Pathaan, Shah Rukh Khan and John Abraham were seen together for the first time in an advertisement. In 2007, the actors appeared in a Pepsi commercial, where they poked fun at each other as the vied for the attention of a teenager, who was least interested in them, and had his eyes on the soft drink, which was being presented in a new packaging. Also read: John Abraham pens a note about Pathaan amid reports that ‘all is not okay’ between him and Shah Rukh Khan

The almost one minute-long commercial shows both Shah Rukh Khan and John Abraham getting upstaged by a teenager with attitude. The advertisement opens in a cafe, where Shah Rukh Khan and John are chatting and mocking each other’s hairstyle. A young boy walks in, and, spotting the actors, he walks purposefully towards them. Spotting the boy, who was dressed in an oversized casual outfit, Shah Rukh and John wondered who should give the autograph first to the boy. While Shah Rukh mocked John’s body, the latter hinted the actor did not know how to sign an autograph in style.

As the boy reaches them, both of them stop snatching the pen from each others’ hands to smile at him. Then the boy makes a gesture, saying, “Uncle, zara side dena (uncle, step aside).” The actors then move apart to reveal a Pepsi vending machine behind them. The boy walks towards the vending machine and gets his Pepsi can, leaving both Shah Rukh and John shocked and embarrassed. Shah Rukh then told John in Hindi, “He called you uncle. I did not like that at all.”

Next, Shah Rukh and John spot the same boy again at the cafe. As John gets ready to ‘hit him’ for insulting him the last time they met, the boy asked Shah Rukh if he was holding his Pepsi can. When Shah Rukh said yes, the boy replied ‘thank you, uncle’ leaving John in splits. Shah Rukh then said pointing towards John, “He said thank you (to me), and uncle (to you).”

Shah Rukh and John came together for the first time on the big screen in their new movie Pathaan. The action film, written and directed by Siddharth Anand and backed by Aditya Chopra, also stars Deepika Padukone. Pathaan was released on 25 January 2023, ahead of Republic Day 2023 in Hindi, Tamil and Telugu. Before the film’s release, there were reports of tiff between Shah Rukh and John over Pathaan. However, both actors have spoken positively about each other in recent social media posts, and also attended Pathaan’s special screenings together in Mumbai.