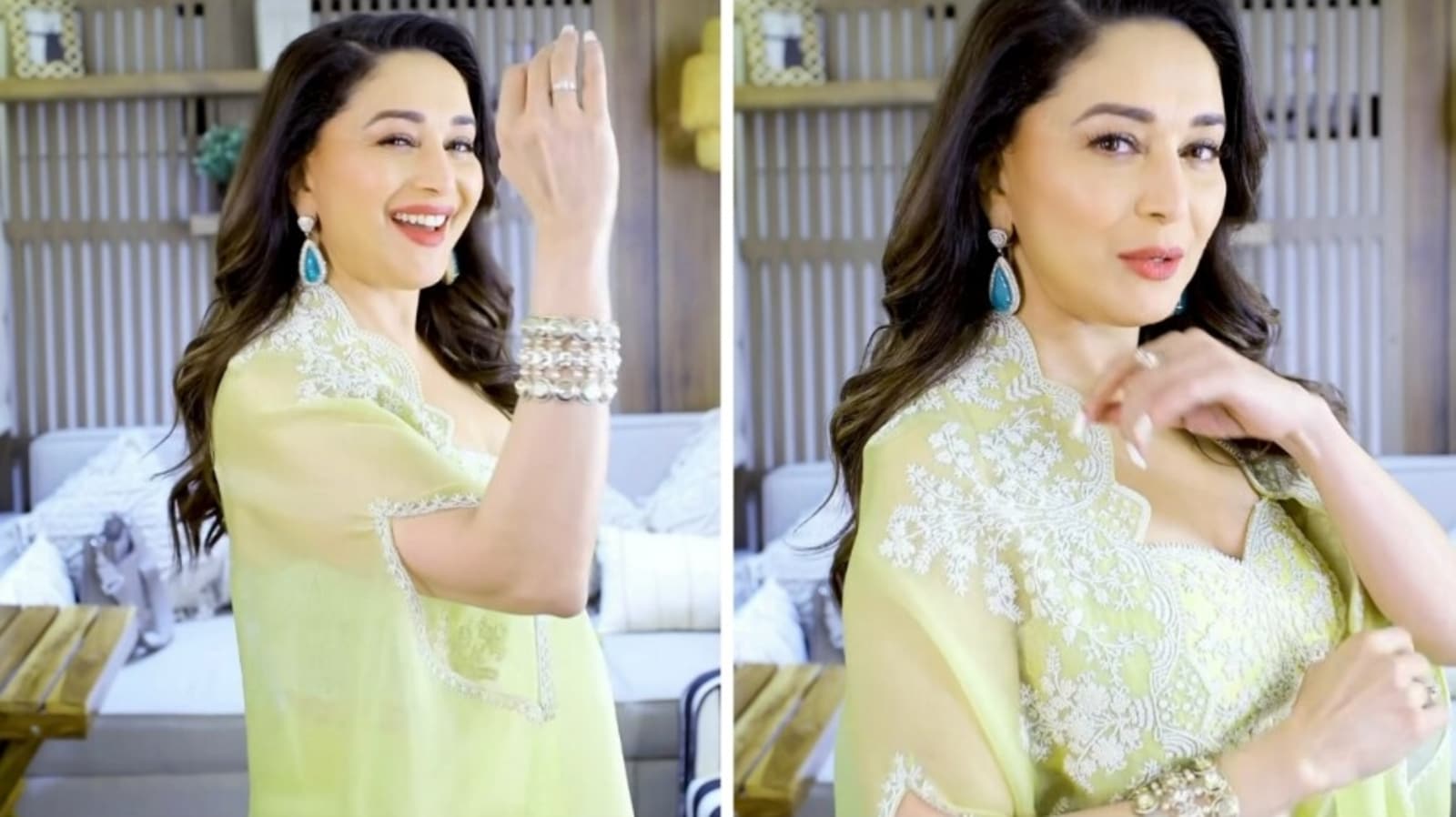 Actor Madhuri Dixit took to Instagram and shared video as she grooved to Ghodey Pe Sawaar. She left fans impressed with her dance moves on Wednesday as she grooved to the popular song, Ghodey Pe Sawaar from Tripti Dimri, Babil Khan and Varun Grover’s movie, Qala. The original dance video featured Anushka Sharma in special appearance. Reacting to Madhuri’s dance, fans felt that she danced better than Anushka. Many fans reacted to her dance post. (Also read: Madhuri Dixit dances to Choli Ke Peeche Kya Hai on Indian Idol 13; fans are in awe of her ‘thumkas’. Watch)

In the video, Madhuri decked up in green ethnic outfit with white embroidery on it, and wore matching bracelet. She left her hair loose. She danced and gave perfect expressions while Ghodey Pe Sawaar played in the background. She was all smiles and lip-synced to the song as well. The song is sung by Sireesha Bhagavatula and penned by Amitabh Bhattacharya, and music is directed by Amit Trivedi.

Reacting to Madhuri’s dance video, one of her fans wrote, “She did it better than Anushka.” Another fan commented, “The queen of Reels is back.” Other fan wrote, “You are made for this song (smiling face with red heart eyes emoji).” A fan commented, “No one can defeat you.” “The epitome of grace and beauty”, added one.

Qala was a psychological drama, which revolved around a young singer, who was haunted by her past, while she tried to win her mother’s approval. It marked late Irrfan Khan’s son Babil Khan’s acting debut in Bollywood. Anushka Sharma was seen in a retro look as she starred in a black-and-white sequence during the song Ghode Pe Sawaar. 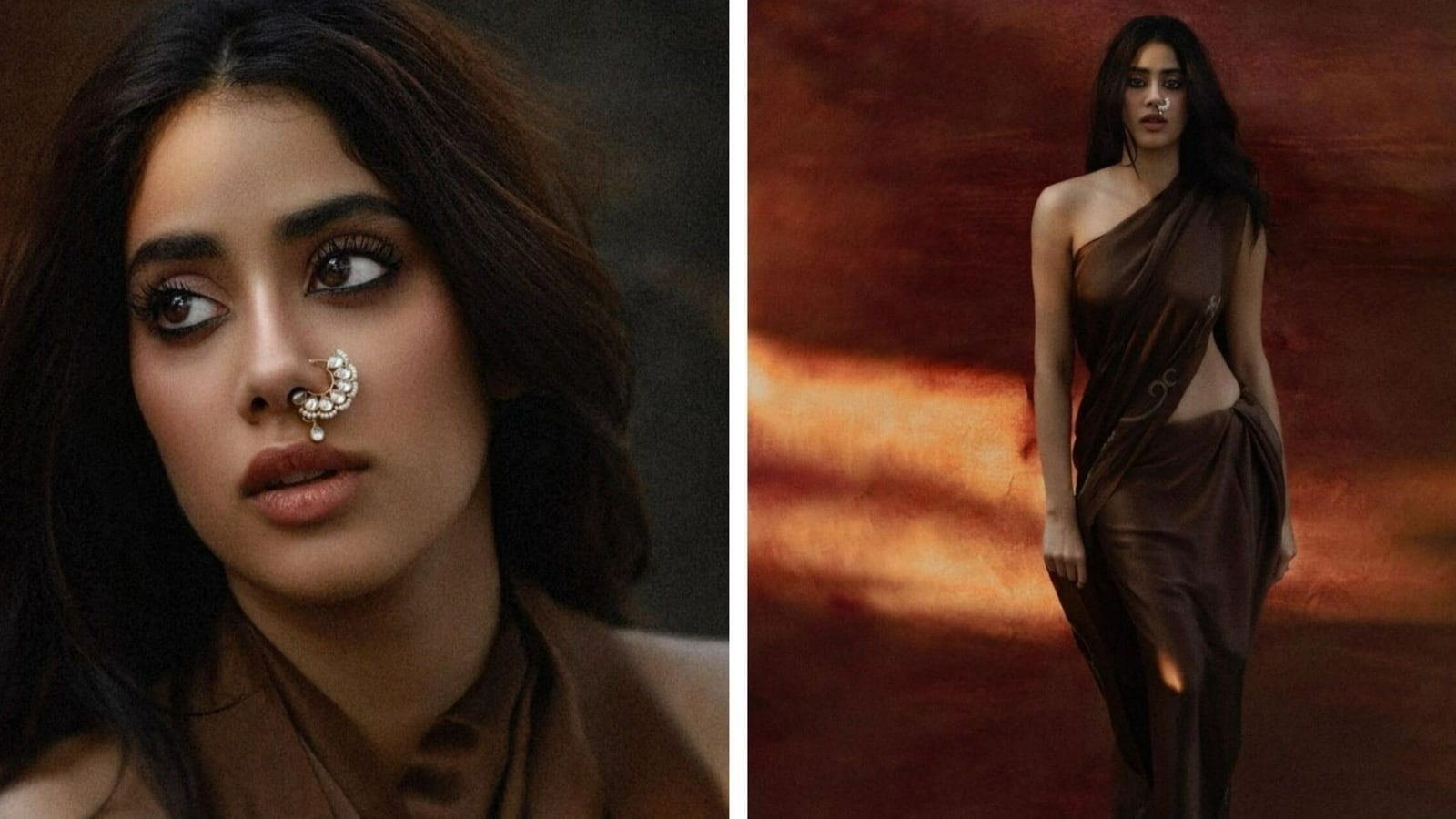 Actor Janhvi Kapoor took to Instagram to share pictures from her recent photoshoot, where she was wearing a huge nose ring. She shared a series of photos of herself on Friday, which invited a sweet reaction from rumoured boyfriend Shikhar Pahariya. She wore a brown saree for the photoshoot. Janhvi’s post also garnered numerous likes from her followers on Instagram, including sister Anshula Kapoor, daughter of Boney Kapoor. (Also read: Janhvi Kapoor is high on glamour in green at Anant Ambani’s engagement, rumoured boyfriend Shikhar Pahariya reacts)

On Friday, Janhvi Kapoor shared her pictures with an earthen diya emoticon. The post had Janhvi dressed in a brown saree standing in a colour-coded background and facing the camera. She styled the ensemble with minimal accessories and a huge nose ring.

Janhvi’s pictures were showered with numerous likes and comments. Her rumoured boyfriend, Shikhar Pahariya, reacted by dropping a heart emoticon. Anshula Kapoor wrote, “BRO (fire emoticons).” A few other users praised the photoshoot and said Janhvi has been serving looks, referring to her recent pictures with a white saree.

With their recent public appearances together and their social media exchanges, both Janhvi and Shikhar seem to be acknowledging their relationship. According to several reports, they have been rumoured to be dating for some time now, but neither of them have confirmed or denied it. Janhvi and Shikhar were spotted together at Anant Ambani and Radhika Merchant’s engagement bash in Mumbai recently. They also went together on a vacation to Maldives. Earlier, the couple was also seen leaving Janhvi’s cousin, producer-stylist Rhea Kapoor’s residence together in a car. They also attended an event together in Delhi in December last year.

Janhvi will be next seen in Bawaal with actor Varun Dhawan. The Nitesh Tiwari directed film is set to be released on April 7, 2023. She will also star in Mr and Mrs Mahi alongside actor Rajkummar Rao in one of her upcoming projects, where she will essay the role of a cricketer.