Screenwriter Javed Akhtar once answered if he was a ‘good father’ to his children–Farhan Akhtar and Zoya Akhtar. He admitted that he might have not been a ‘conventional father’ to them, but there’s nothing that he can’t discuss with them. As Javed turns 78 on Tuesday, look back at the time when he opened up about his relationship with his kids. Also read: When Javed Akhtar was mistaken as Gulzar at airport but did not correct it

Javed was married to actor-screenwriter Honey Irani. They parted ways in 1978 and share son Farhan Akhtar and daughter Zoya Akhtar. Later Javed fell for Shabana Azmi and tied the knot with her in 1984.

During an interview with Filmfare in 2001, Javed was asked if he was a ‘good father’ to his kids. In reply, movie website Tanqeed quoted him saying, “I wasn’t a ‘father’ in the conventional sense of the word. Traditionally, fathers and sons have never had a communicative relationship. But Farhan, Zoya and I have had a very democratic relationship. There’s nothing in the world they can’t discuss with me. My kids can be very argumentative. Democracy has its own problems.”

“It would be naive on my part to believe that it must not have made a difference. But on the positive side, my children have always seen mutual respect between Honey and me. We had extremely civilised relations which kept growing better and friendlier with time. Today, Honey and I are the best of friends,” he also added during the same conversation about difference to his relationship with the kids after his separation.

Javed Akhtar recently launched his new book, titled Jadunama, a coffee table book unveiled by Gulzar. The book draws its title from the screenwriter’s nickname Jadu. It is a compilation of extracts from his public speeches, interviews and quotes.

Javed Akhtar came to Indian cinema when there was on concept of screenwriters and it was Rajesh Khanna who is credited with giving Javed Akhtar and Salim Khan first chance as writers in Haathi Mere Saathi. The duo wrote screenplay of many films, such as Seeta Aur Geeta, Deewar, Sholay, Don and Mr India. Later, they parted ways in 1982. Betaab, Saagar, Meri Jung, Khel, Roop ki Rani Choron Ka Raja, Lakshya and Don: The Chase Begins Again are some of his best works as individual screenplay writer.

Dear makeup, I love you, but sometimes, you break my skin out and clog my pores. I’m looking at you especially, setting powder. I adore a matte, flawless look as much as the next person, but recently, my skin has become uber-sensitive to the types of products I use— even after cleansing my face multiple times, using makeup wipes and doing a full skincare routine, I tend to break out the morning after I do my full makeup.

I’ve tried my fair share of products, from TikTok-viral foundations and setting powders with cult followings in the beauty community, and I’ve pored through enough reviews to fill up a book. I was convinced that all hope was lost, and I would be perpetually stuck doing skincare damage control every time I put on my beloved makeup (ever heard that phrase, “Beauty is pain?”), until I came across this lightweight sebum drying powder from Etude House.

This holy grail product consists of loose powder that contains 80% mineral. Its primary purpose is to control extra sebum and oil on your face while improving the health of your skin. It’s not a setting powder, per se; it’s more lightweight and contains beneficial ingredients like sugar polymer and cotton extact so your face doesn’t feel like it’s caked on with layers of makeup.

If I had to describe this powder in a phrase, it would be “skincare with the benefit of matte makeup.” You can put it on over your basic skincare products or a full face of foundation— tinker around and find whatever routine works best for you. Personally, I apply my moisturizing skincare, then sunscreen (never skip sunscreen!), touches of concealer wherever needed and then finish off with this powder. The end result is a matte, poreless face that looks like I put on foundation— at least, that’s the verdict I’ve gotten from friends and family alike.

If you feel like it’s too good to be true (I assure you, it’s not), scroll below to read what some Amazon reviewers have said about this product. The best part? It’s only $7, and a little goes a long way, so you’re truly getting the most bang out of your buck. 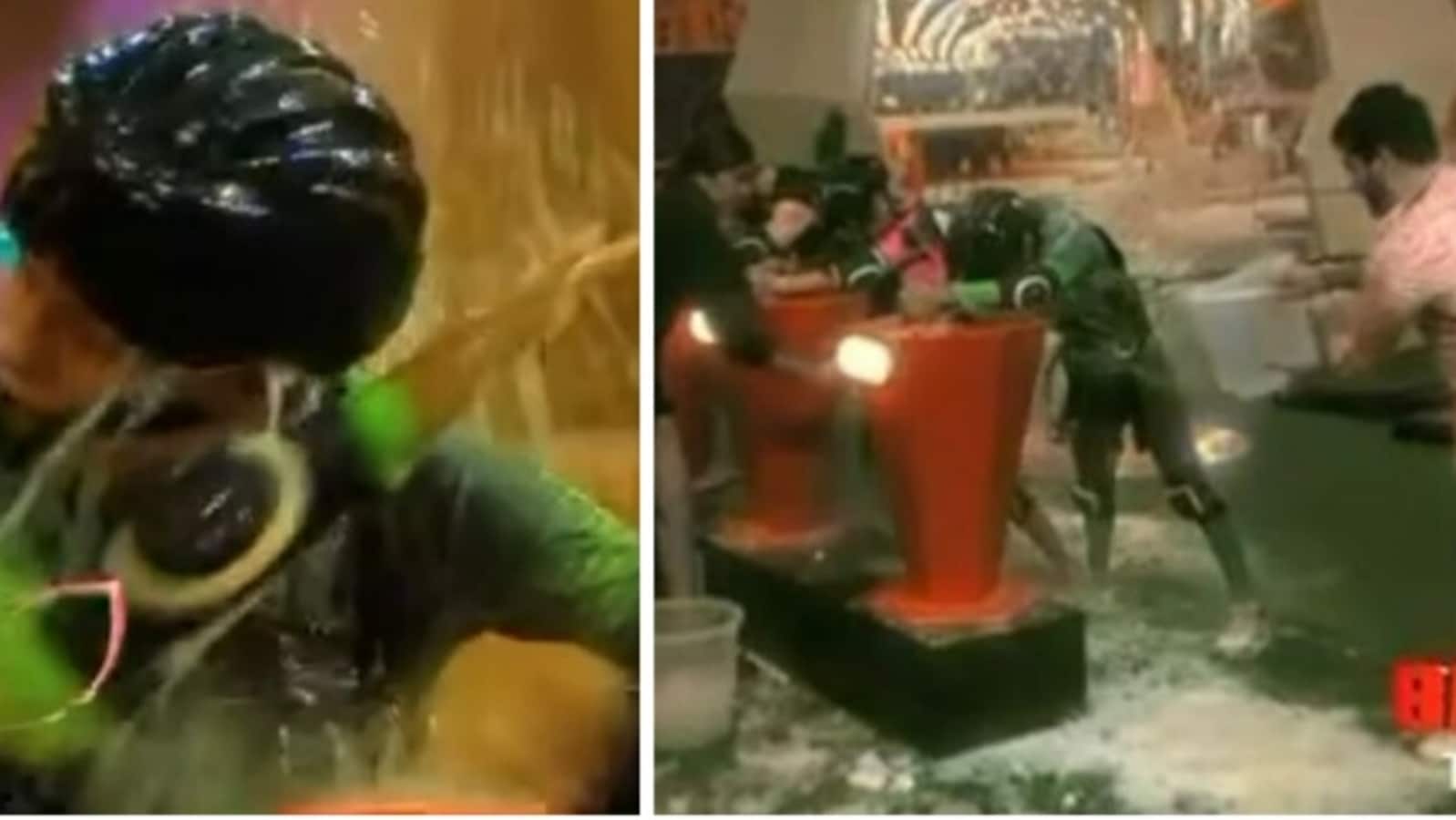 Bigg Boss will give the prize money task to the housemates in the upcoming episode, to get back their prize money. The house got divided into two teams. One team consisted of Shiv Thakare, Nimrit Kaur Ahluwalia and MC Stan. The other team had Shalin Bhanot, Priyanka Choudhary and Archana Gautam. Shiv threw a bucket of water on rival member, Priyanka to distract her from the task. Priyanka asked him not to throw water in her eyes. Shiv did not pay attention to her requests. In the end, she lost her calm, and shouted ‘chorungi nhi tujhe.’ Many fans came in support of Priyanka in the comment section of the promo shared by ColorsTV. (Also read: Priyanka Choudhary gets into ugly fight with Shiv Thakare on Bigg Boss 16. Watch)

ColorsTv shared the promo on their social media handles with the caption, “Prize money wapis paane ke khatir lagegi ek aur baazi (In order to get the prize money back, how much contestants will suffer)?”

The promo opened with Shiv, Nimrit and MC Stan throwing water on their opponent team members—Priyanka, Shalin and Archana. Then, Shalin said, “Hair remover cream?” as he stood next to podium with red button on it. Nimirt can be heard saying, “Itni problem hai toh chord dena task (If you have so much problem, then don’t do the task).” A voiceover in the background, “Prize money paane ki khaatir lagegi ek aur baazi (To win their lost prize money back, they have to pay back a lot).” Shiv mixed detergent powder in buckets filled with water, and trimmed Shalin’s hair. Nimrit put a pack of ice cubes inside Shalin’s T-shirt.

Bigg Boss 16 airs Monday to Friday at 10pm, and on Saturday and Sunday at 9pm on ColorsTV. The show is hosted by actor Salman Khan. Shiv Thakare, Sumbul Touqeer Khan and MC Stan are nominated for this week’s eviction. 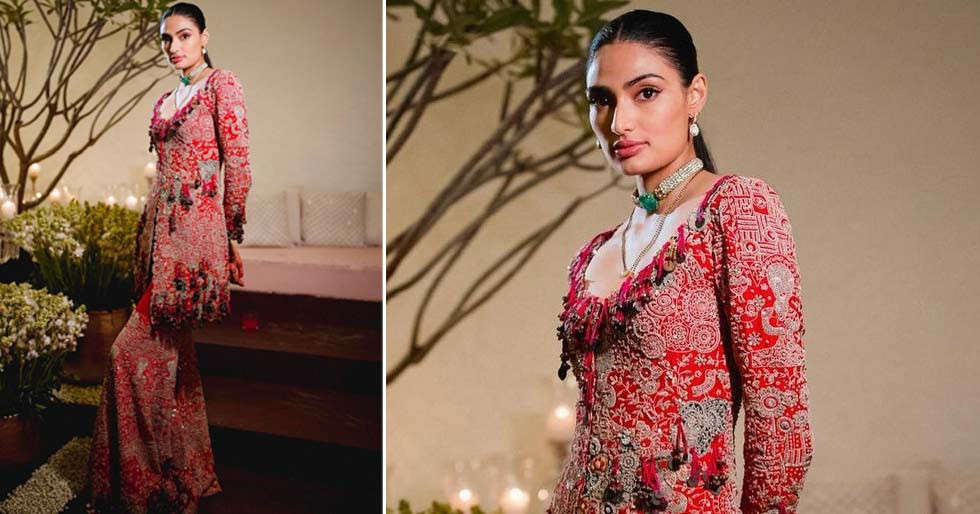 Athiya Shetty tied the knot with cricketer KL Rahul recently. Their intimate ceremony was held at Suniel Shetty’s home in Khandala. Continuing the celebrations, Athiya turned heads at the wedding after-party, where she flaunted a minimalistic mangalsutra.

New photos from Athiya Shetty’s post-wedding celebrations have now emerged. The photos showcase her mangalsutra with a dainty solitaire. The new bride was clicked wearing a red printed dress. Check it out here:

Athiya Shetty shared her first wedding photos with KL Rahul in a post captioned, “‘In your light, I learn how to love…’ Today, with our most loved ones, we got married in the home that’s given us immense joy and serenity. With a heart full of gratitude and love, we seek your blessings on this journey of togetherness.”

Athiya Shetty and KL Rahul’s wedding took place on January 23. The two were dating for almost four years before tying the knot.