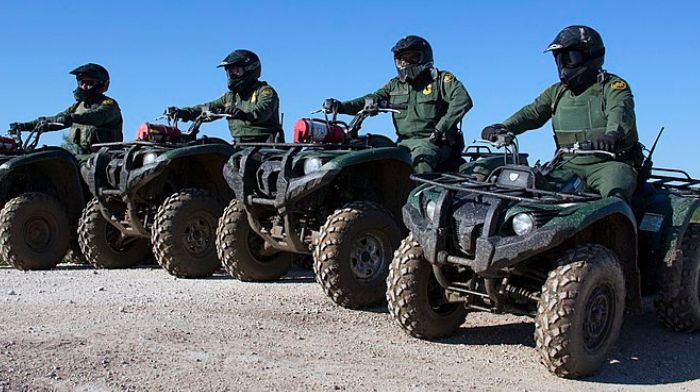 By Bethany Blankley (The Center Square)

U.S. Border Patrol agents have arrested a record 38 people on the FBI’s Terrorist Screening Database during the first three months of fiscal 2023, according to U.S. Customs and Border Protection data.

By comparison, 14 were apprehended from fiscal years 2017-2020 under the Trump administration.

Tom Homan, former acting director of Immigration and Customs Enforcement, told The Center Square, “Since [President Joe] Biden has taken office we are at approximately 140 KST [known or suspected terrorists] trying to enter the country illegally. Border Patrol has arrested people from 161 different countries [some of which] are sponsors of terrorism.

“With 1.2 million KNOWN got aways plus an untold number of unknown got aways; how many KST have successfully entered this country through the southwest border?” he asked. He’s referring to at least 1.2 million gotaways in the past 23 months, those whose who’ve illegally entered the U.S. and intentionally evaded capture by law enforcement.

“To say none would be clear ignorance,” he added. “A lot of systems were put into place after 9-11 to prevent terrorists from getting a visa or a plane ticket to enter the US. This has successfully stopped thousands with derogatory information from entering this country. Why would a terrorist attempt to get a plane ticket or visa knowing he will be vetted?

“It is much easier to pay the cartels a little extra and simply cross the southwest border like the 1.2 million and escape apprehension because Border Patrol agents are so overwhelmed with this manmade Biden border crisis.”

Former Border Patrol agent and Terrell County, Texas, Sheriff Thad Cleveland told The Center Square he’s worried about those who haven’t been caught. He said the ones who have signify a bigger problem: “many more made it successfully into the United States. Not because our Border Patrol agents aren’t doing a good job – the work they do is amazing,” but because the president and his administration “don’t care about our borders.”

Cleveland also says that from his 26 years of experience in Border Patrol, the gotaways being reported in the agency’s internal system “are much lower than the actual amount. There is no way to look at every crossing location and trail along the 2,000-mile border with Mexico and get an actual count.”

“Americans should be worried,” he said. “I’m worried. I see what crossed the border. I know how many we apprehend and I know many more get away.”

Former COO and acting Commissioner of CBP Mark Morgan, agreed, saying, “our focus should be directed at those we don’t apprehend.”

Agents increasingly apprehending known or suspected terrorists indicates more are coming and getting through, he told The Center Square, which “is why we say what’s happening at our southern border is a national security crisis.” Because Border Patrol agents “are pulled away from their enforcement mission and relegated to administrative duties processing millions of illegal aliens … handing operation control of our border to the cartels, the fact is, we have no idea who is among the 1.2 million got aways who now call the U.S. home,” he said.

“We could have the next terrorist sleeper cell in the country planning the next attack on U.S. soil and we have no idea,” he added. “Not to mention the untold numbers of violent criminals among the unprecedented volume of got aways, planning to take their next American victim.”

Department of Homeland Security Secretary Alejandro Mayorkas has for nearly two years maintained the border is secure. In March 2021, after House Republicans warned about terrorists coming through the southern border, he testified, “A known or suspected terrorist … [has] tried to cross the border … not only this year but last year, the year prior and so on and so forth … And it is because of our multi-layered security apparatus, the architecture that we have built, since the commencement of the Department of Homeland Security, that we are in fact able to identify and apprehend them and ensure that they do not remain in the United States. … We actually deny them entry based on our intelligence and based on our vetting procedures, which have only grown in sophistication throughout the years.”

But by the end of the year, Border Patrol agents had apprehended an alleged Saudi terrorist entering Arizona illegally through Mexico. Last July, Richmond, Virginia, police thwarted a terrorist plot hatched by Guatemalan nationals in the U.S. illegally, including one who’d been twice deported and another with an expired visa.

Last July, Mayorkas again testified that DHS could “do more” to address terrorism threats. Multiple members of Congress have called for Mayorkas to be impeached and at least 14 attorneys general, led by Florida AG Ashley Moody, have called on him to resign.

“This is a Clear Violation of Legal Standards” The sudden death of a cadet player for Sporting Club de Huelva has shocked the Spanish football community.

Estrella Martin, 14, died suddenly in her hometown of Ayamonte, in southern Spain, on Wednesday, according to the club.

According to the report from local media, Estrella had a routine Tuesday training session before being found unresponsive in her home by her parents on Wednesday.

“The Sporting Club de Huelva deeply regrets to announce the death this morning of our player Estrella Martín Rasco in her native Ayamonte,” the club said in a statement.

“Belonging to our lower echelons, the soccer player, in the cadet category, and a regular in the calls for the provincial women’s under-15 team, has left us today in her hometown of Ayamonte, leaving a deep sorrow for her family, friends and all the club.”

“Once this sad news was known, the club has suspended this week’s training sessions for the youth academy and the one that the first team was supposed to complete today. The matches of the lower ranks this week have also been postponed and the postponement of tomorrow’s League F game in Seville has also been requested,” the club continued.

“There are no words to comfort family and friends. All my support and strength for them. Fly high, Estrella. You will be the star that brings us always lead. RIP, little one,” said Manuela Romero, president of Sporting Huelva.

“Real Madrid, its president and its Board of Directors deeply regret the death of Estrella Martín, a cadet player of Sporting Club Huelva, and would like to express their condolences and affection to her family, her teammates, her club and her loved ones. Rest in peace,” the club wrote on its social media.

“From #SevillaFCFem we show our deepest condolences for the death of the player Estrella Martín, sending condolences both to the player’s family and to the club, @sportinghuelva. May she rest in Peace,” wrote Sevilla FC Femenino.

The news of the young player’s sudden death comes after another young footballer died after a sudden collapse during a game in Spain’s Malaga last month.

The club said at the time: “After a few moments of uncertainty for all those attending the match and club staff and after the resuscitation attempt by the local police and 061, our player could not be resuscitated.”

Stanford University’s promising young female footballer Katie Meyer died at the age of 22 due to an apparent suicide on Monday, February 28, 2022. The court is expected to release the 911 call and the video of the alleged attack.

The tape will be available at 9 AM.

The police body camera video showing the attack on former U.S. House Speaker Nancy Pelosi’s husband at their San Francisco home last October will be released to the media on Friday morning, according to court officials.

A statement released by the San Francisco Superior Court said the video and audio in the case of the People vs. David DePape will be made “available to accredited media members” Friday morning at 9 a.m. in accordance with Judge Stephen M. Murphy’s order Wednesday.

Media representatives will be able to pick up the CD’s containing the footage and audio recordings from clerks at the Hall of Justice once the provide identification, a completed criminal records request form and a $25 payment.

A San Francisco judge on Wednesday granted a motion to release SFPD body cam footage of the Paul Pelosi attack and other evidence sought by a coalition of news organizations. Top Iowa Republicans from the governor on down aren’t returning Donald Trump’s phone calls and are not committing to support him in 2024.

The former president, itching to seal up support early in what remains a key state in the Republican presidential contest, has checked in with Iowa influencers who have stood by him in the past.

Senators Chuck Grassley and Governor Kim Reynolds didn’t answer when he telephoned recently, and neither of them are willing to give their party’s former leader their nod this early, according to people familiar with the matter. Nor are Joni Ernst or other top state elected officials.

Republicans are not so subtlety freezing Donald Trump out. It isn’t 2016 anymore or even 2020. Trump expected the Republican Party to line up behind him, but instead, they are pretending like they are too busy to take his calls.

If the Republican leadership decides to rally around someone else, but the base stays with Trump, the odds are that weak elected Republicans will rally around the former president, but so far Republicans in Iowa are seeing Trump’s number and refusing to pick up.