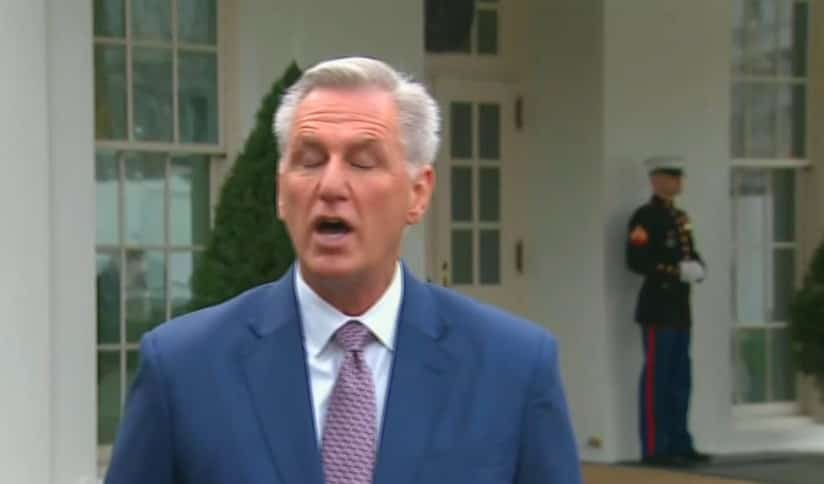 Republicans in the House and Senate helped Trump add trillions in debt that will weigh down the economy for years without asking for spending cuts.

The national debt has risen by almost $7.8 trillion during Trump’s time in office. That’s nearly twice as much as what Americans owe on student loans, car loans, credit cards and every other type of debt other than mortgages, combined, according to data from the Federal Reserve Bank of New York. It amounts to about $23,500 in new federal debt for every person in the country.

The growth in the annual deficit under Trump ranks as the third-biggest increase, relative to the size of the economy, of any U.S. presidential administration.

It is easy to confuse debt and deficit, so keep in mind that the deficit is the monthly or yearly amount the government has to borrow. The debt is the cumulative amount the nation owes throughout its history.

To look back on it now, the headlines here at PoliticusUSA were staggering. Trump and Republicans increased the month-to-month deficit by 66% from May to June 2018. In August of 2018, Trump and House Republicans created a deficit that was twice as big as any month in the previous year.

Kevin McCarthy and many of the same House Republicans now calling for spending cuts ran up these deficits and added to the debt without asking Trump for any spending cuts in return. The big driver was the $1.9 trillion Trump/Republican tax cuts for the rich. Most of the Trump debt ($4.8 trillion) was run up before COVID. Republicans added more than a trillion dollars a year to the debt through tax cuts and increased spending before the pandemic hit, and now they have the nerve to demand spending cuts from Biden.

Republicans are asking Biden and the American people to pay for the bills they ran up in considerable part by cutting taxes for the wealthy and corporations with cuts to programs like Medicare and Social Security.

President Biden has a justifiable position in saying no to House Republican demands for spending cuts. Under Trump, House Republicans raised the debt ceiling without offsetting cuts three times.

If House Republicans want to raise revenue to cover the increasing debt ceiling, they can start by raising taxes on the wealthy and corporations and cleaning up their deficit and debt mess. 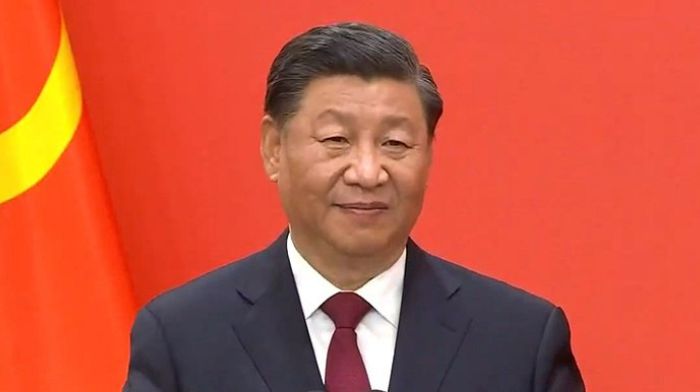 By Kim Jarrett (The Center Square)

Grand Forks, North Dakota, will deny building permits to a Chinese-based food manufacturer that purchased land near an Air Force base, the mayor said Tuesday.

Chinese food manufacturer Fufeng Group announced the purchase of 370 acres of land for a wet corn milling plant in 2021. The site is 12 miles from the Grand Forks Air Force Base.

In a letter to U.S. Sens. Kevin Cramer and John Hoeven, the USAF called the purchase of North Dakota land by a Chinese company “a significant threat to national security.”

The Committee on Foreign Investment in the United States said in December it did not have the jurisdiction to weigh in on the plant.

“While CIFUS concluded that it did not have the jurisdiction, the Department’s view is unambiguous: the proposed project presents a significant threat to national security with both near-and long-term risks of significant impacts to our operations in the area,” said Andrew Hunter, assistant secretary of the Air Force for acquisition, technology and logistics in a letter to Cramer and Hoven.

“These actions do not affect the land ownership as the company will still legally own the land they have purchased,” Bochenski said in a statement posted on the city’s website. “The response from the Federal Government during this process can only be viewed as slow and contradictory. This directive leaves open the question of other entities with Chinese connections across the nation, to include Grand Forks’ Cirrus Aircraft site location and Chinese students and professors at the University of North Dakota.”

“Given these concerns, we support the decision by the City of Grand Forks to initiate steps to stop the project with Fufeng Group and will support the city in finding another partner for a corn milling operation,” Burgum said in a news release. “As our farmers who compete in global markets know, agriculture is a global business, and North Dakota welcomes investment from domestic companies and our friends and allies.”

“With this new process, we will be able to prevent nations who hate us – like Communist China – from buying up our state’s agriculture land,” Gov. Kristi Noem said in a previous statement. “We cannot allow the Chinese Communist Party to continue to buy up our nation’s food supply, so South Dakota will lead the charge on this vital national security issue.”

Tom Brady Retires From Football “For Good” This Time (VIDEO)

The greatest player in NFL history is officially riding off into the sunset. Tom Brady posted a short video on his Twitter account Wednesday morning announcing he was retiring “for good.”

His announcement comes exactly one year after he announced his first retirement from football. Brady infamously changed his mind roughly six weeks later, resulting in the breakup of his 13-year marriage with Brazilian supermodel Gisele Bundchen, who wanted him to remain on the sidelines.

Brady in his video acknowledged “the process was a pretty big deal last time” so wanted to make this brief. He thanked every single person for supporting him from family, teammates, competitors, and friends and allowing him to live his “absolute dream.”

“I wouldn’t change a thing, I love you all,” Brady concluded.

TRENDING: Hunter Biden’s Metabiota Labs Received Tens of Millions of Dollars in DOD Contracts – Experimented with Bat Viruses in at least One Biolab

Truly grateful on this day. Thank you 🙏🏻❤️ pic.twitter.com/j2s2sezvSS

Here is the story from ESPN:

Tom Brady says he is retiring “for good” from football, ending a storied 23-year NFL career during which the star quarterback won seven Super Bowls and set numerous records.

Brady announced his decision Wednesday on social media, saying he “wouldn’t change a thing” about his career.

Brady, 45, also announced he was retiring on Feb. 1, 2022, before changing his mind 40 days later and returning to play this past season with the Tampa Bay Buccaneers.

Brady informed the Buccaneers of his decision at 6 a.m. ET on Wednesday morning, according to ESPN’s Jeff Darlington.

Brady, who won six Super Bowls with the New England Patriots and one with the Buccaneers, ends his career as the NFL’s all-time leader in passing yards (89.214) and touchdown passes (649). The three-time league MVP passed for 4,694 yards — third most in the NFL — and 25 touchdowns this past season, his third with Tampa Bay.

Brady is the only player to win more than five Super Bowls and has been MVP of the game five times.

Brady can immediately begin working as analyst for Fox Sports, who signed him to a 10-year, $375 million contract this past summer. He also launched a BRADY brand clothing line one year ago, has a successful health and wellness brand called TB12 Sports and he founded his own production company, 199 Productions — a nod to his selection as the 199th overall pick in the 2000 NFL draft.

Brady and supermodel Gisele Bundchen finalized their divorce this past fall, during the Bucs’ season. It ended a 13-year marriage between two superstars who respectively reached the pinnacles of football and fashion. 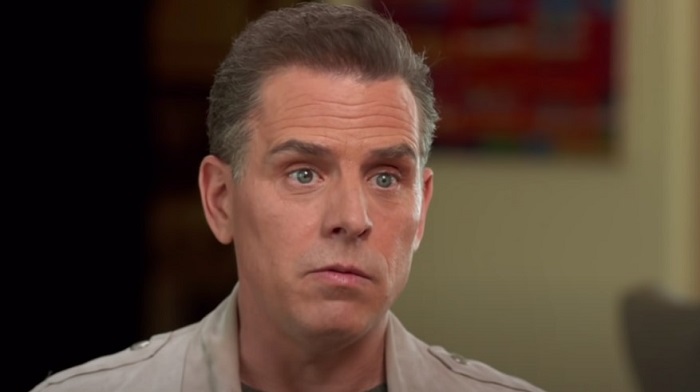 Shocking text messages allegedly show Hunter Biden withheld pay, then later sent varying sums of money to a cash-strapped female assistant as long as she had video sex with him on Facetime.

The messages were obtained by the Daily Mail through analysis of the President’s son’s infamous “Laptop from Hell.”

The outlet posted screenshots of the messages which show Biden texting a 29-year-old assistant who worked at Hunter’s law firm, Owasco, in 2018 and 2019.

Initial messages from the woman indicate she is “scraping by” and unable to pay rent, with Hunter responding he would “[make] up for back pay” and feeling “horrible for having treated you so poorly.”

The woman, whose identity the Daily Mail protected, had emailed the law firm questioning why she failed to receive a paycheck and that her dental insurance had not gone through following a recent visit.

In exchange for the back pay, however, the First Son insists she must “make up for back work” by FaceTiming with him.

The female assistant, according to the Daily Mail, represents the fourth known employee with which he carried out a sexual relationship.

And the Democrat Party remains remarkably quiet on such a blatant abuse of power in exchange for sex. Especially considering this is the party that once convinced the public that Mitt Romney was the worst abuser for having ‘binders full of women.’

“If we FT (FaceTime) the rule has to be no talk of anything but sex and we must be naked and we have to do whatever the other person asks within reason,” Hunter appears to text.

Hunter Biden was paying desperate assistant who claimed she couldn’t afford rent on the side as he sent texts like this:

“If we Facetime the rule has to be no talk of anything but sex and we must be naked and we have to do whatever the other person asks” pic.twitter.com/GQLBxoop4G

Another message advises the woman to “set phone up” so he can “spy on you showering.”

A subsequent sequence appears to show Biden asking, “Can I see you’re (sic) beautiful a**?

A payment of $25 is sent and Biden then writes, “Amazing.”

The sexting continues and the messages grow increasingly graphic.

RELATED: Mitt Romney Comes Out Against Hunter Biden Investigation – ‘A Waste of Time’ – Trump Calls Him a ‘Pathetic Joke’

Hunter Biden’s laptop has been a virtual bottomless pit of evidence.

The Political Insider reported over the summer on a video of Hunter, naked and waving around a handgun while playing around with a prostitute.

And to think… Jihad Joe says Hunter Biden is the smartest person he knows😂😂😂😂! pic.twitter.com/rd0RgnmbMQ

Video surfaced in September of the President’s son slip-sliding away down a slide naked into a pool at a $4,140-per-night Malibu rental home.

Other videos showed Hunter filming himself weighing his stash of crack cocaine and fondling himself.

He had pictures on his laptop of him with prostitutes, sometimes involving pets, and discussed smoking parmesan cheese thinking it was crack cocaine.

The video sex sessions with this particular female assistant? Those, according to the Daily Mail, were filmed and the images were also saved on his laptop hard drive.

The new GOP majority in the House has indicated they will conduct investigations into Hunter Biden’s business dealings and what – if any – role President Biden played in them.

The House Oversight Committee is expected to hold a hearing on Twitter and its handling of a 2020 New York Post story regarding the Biden laptop in February.

Hunter Biden’s taxes and foreign business work are already under federal investigation, and the Washington Post first reported that he could be charged with tax crimes and a false statement related to a gun purchase.

Now is the time to support and share the sources you trust.
The Political Insider ranks #3 on Feedspot’s “100 Best Political Blogs and Websites.”