During the darkest days of the pandemic, money was no object in many developed markets.

But 2022 was the year when this “spending” slowed and was instead more widely rebranded and accepted as actually being “borrowing.” This realization justified the beginning of deep cuts in public spending compared to before and during the pandemic.

Despite these cuts, which have been always slower to implement than communicate, inflation has been rampant across Europe and beyond, partially due to supply chain issues linked to the situation in Ukraine. Wages failing to rise in line with inflation as well as cuts to public services have led to a cost-of-living crisis in many markets.

These conditions are not conducive to inducing confidence for investors or founders. Edtech, and education more broadly, usually one of the more resistant sectors during times of economic crisis, has not been immune to the downturn.

Against this background, we formed our annual review of European edtech activity for 2022. For the first time since 2014, venture capital funding to European edtech startups saw a decline year-over-year, with startups raking in $1.8 billion in 2022 compared to $2.5 billion a year earlier.

The global ecosystem has been on an upward trajectory, albeit less consistently, but the declines in new investment in 2022 were steep: globally funding declined to $9.1 billion last year from $20.1 billion in 2021. This is in line with macro trends in the public markets as well as other tech sectors (both trends were highlighted in our October report with Dealroom).

Italy was the only European market to see a hike in both funding and the number of deals.

Perceived declines in funding are being felt more acutely, given that 2021 was a boom year. Optimism that the pandemic was coming to an end and that the world was reopening extended to ambitious founders and early teams. This momentum carried through to the first half of 2022 for European edtech. Indeed, as we reported in July, European edtech funding was up 40% in the first six months of last year compared to a year earlier.

But as we now know, that momentum faltered in the second half of 2022. Optimism ebbed away, and European edtech startups raised only about $400 million in the latter six months compared to $1.4 billion in the other half of the year.

That said, the sector proved more resilient in Europe than in other major regions. It’s worth pointing out that the region saw more edtech deals happening in the second half than in the first half of 2022, but they were simply smaller and more early-stage rounds at lower valuations.

Funding fell the least in Europe and RoW, with the steepest drop once again in China

In Europe, we see the UK retaining the top spot in funding and deal activity. Edtech companies in the UK secured the most funding — $583 million across 81 deals, more than $200 million ahead of the next market, Germany, where startups raised $363 million across 34 deals.

Italy was one of only few European markets to see increased funding and deal number. Italy’s tech ecosystem has been growing gradually as momentum has built relatively consistently since 2010. It’s also promising to see the capital secured being spread across a range of sectors, with some of the largest rounds raised by companies in fintech, healthtech and real estate.

As for edtech, the market has been on a steep upwards trend since 2020. Though edtech in Italy had a record year in 2019, largely driven by the large round raised by Talent Garden, it’s quite promising to see the upward trend in 2022 being driven by smaller, early-stage rounds of less than $15 million.

Quick fixes: how to transfer iPhone videos to a Windows PC when it keeps disconnecting

Google Fi says customer data may have been stolen by hackers

Google has notified customers using its Google Fi cell service that their personal data may have been stolen in a recent cyberattack, which is believed to be in connection with a T-Mobile data breach earlier this month. In an email sent to Google Fi customers on Monday, obtained by Android Police, Google said that the cell network’s primary network provider had become aware of suspicious activity in a system containing Google Fi customer data.

Google Fi is an MVNO that uses T-Mobile’s network for the majority of its connections alongside US Cellular, but Google doesn’t explicitly name T-Mobile as its primary service provider within the email. We have reached out to Google for clarification and will update this story should we hear back.

Google has not disclosed how many Google Fi accounts were impacted

Google says that hackers may have accessed limited customer information via the compromised system, which includes phone numbers, SIM card serial numbers, account status, and mobile service plan data. The system did not contain personal customer information such as names, email addresses, payment card data, government IDs, passwords, or pin numbers. Google reassured customers that no further action is required by Fi users, and that there was no unauthorized access to Google’s own systems or any systems overseen directly by Google.

Both the timing of the announcement and Google Fi’s relationship with T-Mobile suggest that this breach directly links to a cyber attack earlier this month that impacted 37 million T-Mobile customers  — the eighth T-Mobile hack since 2018. Google has not disclosed how many Google Fi customers may have been impacted by the breach, and the company has yet to provide any information regarding how many users subscribe to the Google Fi service.

Today, Apple launched MLS Season Pass in over 100 territories, giving soccer fans access to all MLS matches, Audi 2023 MLS Cup Playoffs, and Leagues Cup, as well as original programming. Notably, there are no blackouts, so subscribers get to watch matches in or out of market. The 2023 MLS season begins on February 25.

The ten-year deal between Major League Soccer and Apple is significant for both entities as it provides a unique experience to a large fanbase. For the 2022 MLS Cup, the league drew its biggest audience in 25 years, generating 2.155 million viewers across Fox and Univision in the U.S. If Apple’s new subscription proves to be successful, there’s potential for other streaming services and major sports leagues to consider similar agreements in the future. Apple also reportedly may have plans to bid on English Premier League football streaming rights.

How Much Does MLS Season Pass Cost?

MLS Season Pass is now available on the Apple TV app for $14.99 per month or $99 per season. Thanks to Apple’s Family Sharing, up to six members can share the subscription using their own Apple ID and password.

With MLS Season Pass, subscribers have access to all live matches throughout the season, which feature English and Spanish-speaking broadcasters. Canadian games will get French commentary.

The best part about the 2023 season is that most MLS games on Apple will be broadcast on Saturdays and select Wednesdays, with 7:30 p.m. local start times, so fans can more easily learn when they can watch their favorite teams’ matches.

To follow your favorite teams, Apple TV users can select their faves in the app under the “My Sports” tab, where they can also find the scores and schedules for every club. Fans can also sign up for reminders and alerts to be notified on their devices when a game is about to begin.

Before the 2023 season starts, viewers can watch free on-demand content like 2023 player profiles, interviews, highlights from the 2022 season, and more. Fans can watch full replays of matches from the 2019 season up until 2022.

Also, fans don’t need an MLS Season Pass subscription for “MLS is Back” opening weekend since it’ll be available to stream for free on the Apple TV app.

“This talented group of men and women has taken part in the biggest moments across the soccer and sports landscape for the past decade; whether covering them on air or taking part in them as players, they have been at the center of building our sport in North America. We are excited to see how their diversity of experiences will elevate our coverage and storytelling across our live matches and studio shows, bringing our sport to fans around the globe like never before,” said Don Garber, MLS Commissioner, in a statement.

Fans will also get to see the return of Rivalry Week in the 2023 season, which starts on May 13 and ends on May 20. Matchups include Atlanta United vs. Charlotte FC, the New York Red Bulls vs. New York City FC and LA Galaxy vs. San Jose Earthquakes.

Additionally, the MLS All-Star Game will take place on July 19, an annual event with the best of the league competing against an international team. Also, in July, there will be a brand new Leagues Cup where all 47 MLS and Mexico’s Liga MX clubs will play in a monthlong tournament. This makes the Leagues Cup 2023 a historical, must-watch event for fans.

On September 23, the Philadelphia Union will rematch Los Angeles FC since the teams tied 3-3 in the 2022 MLS Cup. LAFC ultimately won the MLS Cup title in a penalty shootout.

MLS Decision Day 2023 will occur on October 21, when all teams compete for playoff spots and seeding.

Other Ways to Watch MLS Matches

In addition to the entire MLS coverage on the Apple TV app, select matches will also be simulcast on Fox networks in the U.S. as part of a four-year linear television agreement. Also, TelevisaUnivision will have Spanish language coverage of over 20 matches in the U.S. 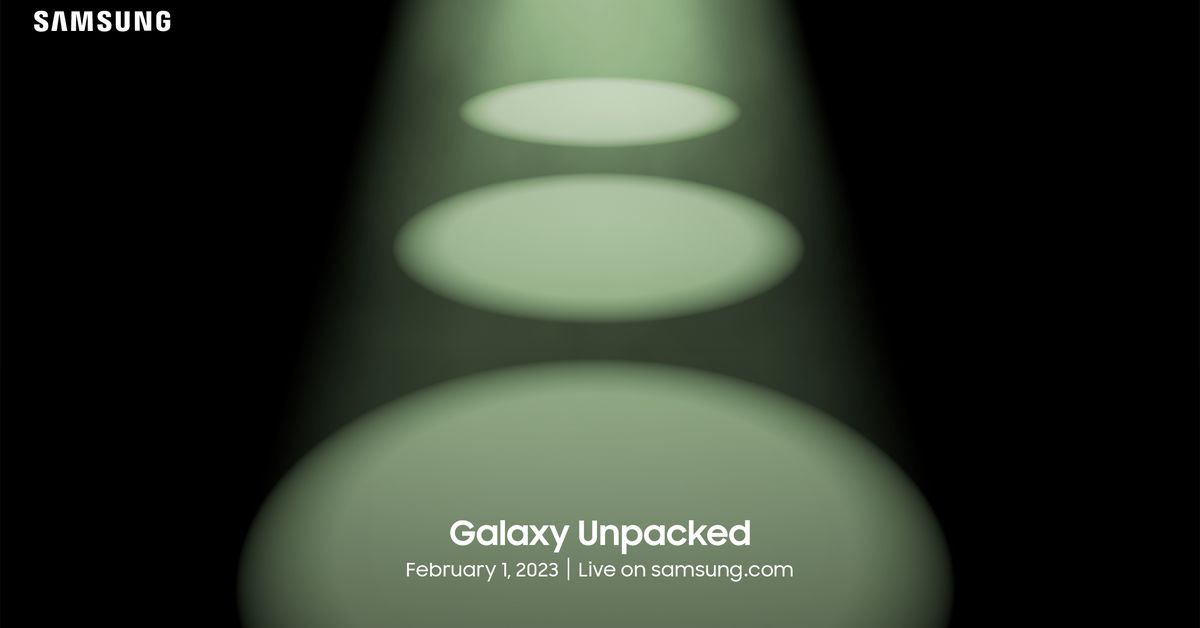 Today’s the day Samsung will announce its latest crop of flagship smartphones, widely expected to be the Galaxy S23 lineup. The Unpacked launch event kicks off at 1PM ET / 10AM PT later today, but if you want to get a handle on everything we’re expecting Samsung to announce then check out our roundup right here. Here’s how to watch it live.

In other news, we’ll be saying goodbye to an excellent VR game and a collection of classic Xbox 360 titles soon. Meta is shutting down Echo VR, one of the better multiplayer VR titles available for its VR headsets, and Microsoft is pulling a bunch of beloved games — including Jet Set Radio and The Orange Box — from the Xbox 360 Marketplace in a week’s time. When it comes to digitally downloaded and multiplayer games, nothing lasts forever.

For now, here’s a silly tweet to start your day:

Stay tuned, as we continue to update this list with the most important news of today: Wednesday, February 1st, 2023.